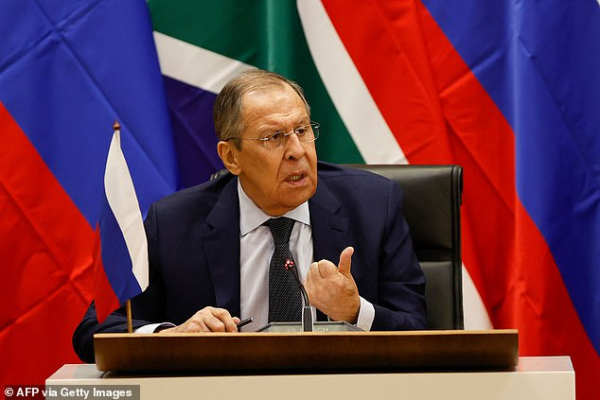 Russian foreign minister Sergei Lavrov today warned the war between Russia and the West is no longer hybrid but was ‘almost a real one’, as he blasted Western nations for sending billions of pounds worth of arms to Ukraine

DailyMail.com is reporting today that Russian foreign minister Sergei Lavrov today warned the war between Russia and the West is no longer hybrid but is ‘almost a real one’, as he blasted Ukraine’s allies for sending weapons to the war-torn country.

Western nations have pledged to send billions of pounds worth of arms to Kyiv and Poland’s prime minister said today his government would ask Germany for permission to send Leopard tanks to Ukraine – and planned to send them whether or not Berlin agreed.

The goal is to destroy everything Russian, from language to culture, that has been in Ukraine for centuries and to prohibit people from speaking their mother tongue,’ Lavrov claimed, parroting the same line that Vladimir Putin has used since the beginning of the war.

The fact that the world is foolishly teasing an insane wild animal like Putin is a dangerous road would could end up with a tragedy on our hands.  The Plain Truth has written and maintains that Russia IS NOT the end time force that brings about Armageddon, that honor goes to a reformed Europe.  That being said, moronic world leaders, and we haven’t had this level of incompetence since World War I, is setting the stage for a war that nobody needs, and the death toll would be potentially in the millions.

It is time that world leaders are replaced.  Ukraine is led by a despot, Russia by an mobster, America and Great Britain by total morons as well as Xi in China who is also not too bright. South Africa, to its credit was seen as the most significant of several African nations to take a neutral stance on the war and refuse to condemn Russia’s invasion – to the disappointment of the U.S. and other Western partners who also view South Africa as pivotal to their plans to build relationships in Africa.

America’s poor handling of nations that should be allies to us have switched and the consequences are not good for the average American.  South Africa will not be dragged into taking sides, and has criticized the West for condemning Russia.  The South African armed forces said last week the exercise was a ‘means to strengthen the already flourishing relations between South Africa, Russia and China’.   Believe me, this is not a good sign.

We need a change in leadership. This is what Donald Trump tried to do, but was defeated by the world elitist that we call the Deep State.

Hopefully this happens before a nuclear war desimates millions around the world.  You could be one of them. All because of the insanity of our leaders both Democrat and Republican

Bob Barney: Don’t be Fooled America, We Live in a Totalitarian State – The Pfizer Example

Where is Mary, mother of Jesus today? Is she the Queen of Heaven?

Get the Mark ~ The Mark of God! Stand Up and Be Counted!